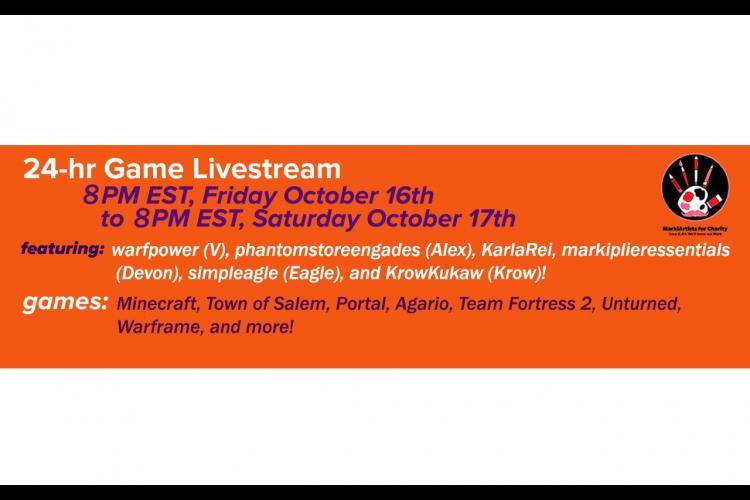 This Friday (today!), The MarkiArtists for Charity, are holding their first ever charity livestream weekend starting on Friday, October 16th and ending on the night of Sunday, October 18th. The event is in support of The All Children’s Hospital of Florida, whom we previously held an event in August where managed to raise $620 (of our original goal of $400)  via Operation Extra Life for the hospital. So for this event our goal is at least $580 in effort to raise $1200 in total for the hospital.

Throughout the weekend we’re going to have many fun events for you such as charity art livestreams, a live 24 hour video game stream, and a live podcast (info about letter two are in sperate calendar posts) that will include MarkiArtist admins, members from the community, and members of other charity based efforts.

The MarkiArtists for Charity are going to be having a video game charity livestream! Starting today, Friday, October 16th at 8pm EST,  markiartists-for-charity admins, community members, and others will be hosting a 24 hour gaming marathon with 100% of the donations going straight to All Children’s Hospital of Florida. Come chill with the team for a ridiculous day of Let’s Plays all for a very important cause!

October 17th, 3 AM - 7 or 8 AM EST: Solo stream by @karlarei where she will be playing games like Portal, The Forest, and Monstrum

So please come on over and watch the us (you can even join in on the multiplayer games if you want!) play video games and try to raise money for the MarkiArtists for Charity’s Fundraiser for The All Children’s Hospital!

Click the logo to learn more about the Benefiting Nonprofit.

Unverified Nonprofit | This nonprofit has not claimed this account and has been added due to fundraisers prior to launch. If representatives for this organization wish to claim this organization page, please contact us.
US EIN
870387205
Tags
Cause This Supports
Health
Game Type
Horror
Multiplayer (Online)
Gaming Playstyle
Collaborative (Online)
Competitive (Local or Online)
sfy39587stp16